This post summarizes one part of a larger digital humanities project on the use of the term "experimental" to describe music. For more on this project--including the data and code--see my Github.

The term “experimental” is used in discussions of musical genre in two contradictory ways: (1) to describe music that does not fit into any existing category, and (2) as a qualifier to describe music that occupies an aesthetically marginal position within a category (similar to the term “avant-garde”). To better understand the latter usage, I designed this quantitative project to identify the genre associations of musicians considered to be “experimental” using data from Wikipedia. I found that experimental musicians were most likely to also be categorized as rock music.

Because “experimental” is not consistently recognized as a genre in and of itself, instead of using genre labels I used a list of 184 experimental musicians from this page.

I used BeautifulSoup to parse the list and obtain the web addresses for each musician’s Wikipedia page. By scraping each musician’s Wikipedia page, I generated a list of 554 genre labels comprising 159 unique entries. I removed 93 results of “None,” in addition to one entry that was an editorial indication rather than a genre (“Edit section: Genres”), resulting in a dataset of 460 labels, of which 157 were unique.

As a final step, I consolidated the 157 unique labels into a handful of larger genre categories using substring matching. I began with well-established genre labels including hip hop/rap, pop, classical, rock, jazz, electronic, and dance. For hip hop/rap I combined the results of the substrings “hip hop” and “rap”; for electronic I used the substring “electro” (rather than “electronic”) so as to encompass words like “electroacoustic.” Next, I analyzed the list to determine if other terms were especially prevalent, and therefore warranted consolidation so as to be compared with the larger categories. I found that the terms metal, punk, and industrial were especially prevalent, and added these as well for a total of ten categories for comparison.

Musicians considered to be experimental were most likely to be associated with rock music subgenres by a wide margin, followed by electronic, pop, and metal. Remarkably, the number of rock-related labels (88) exceeded even the number of instances of the label “experimental” (70). 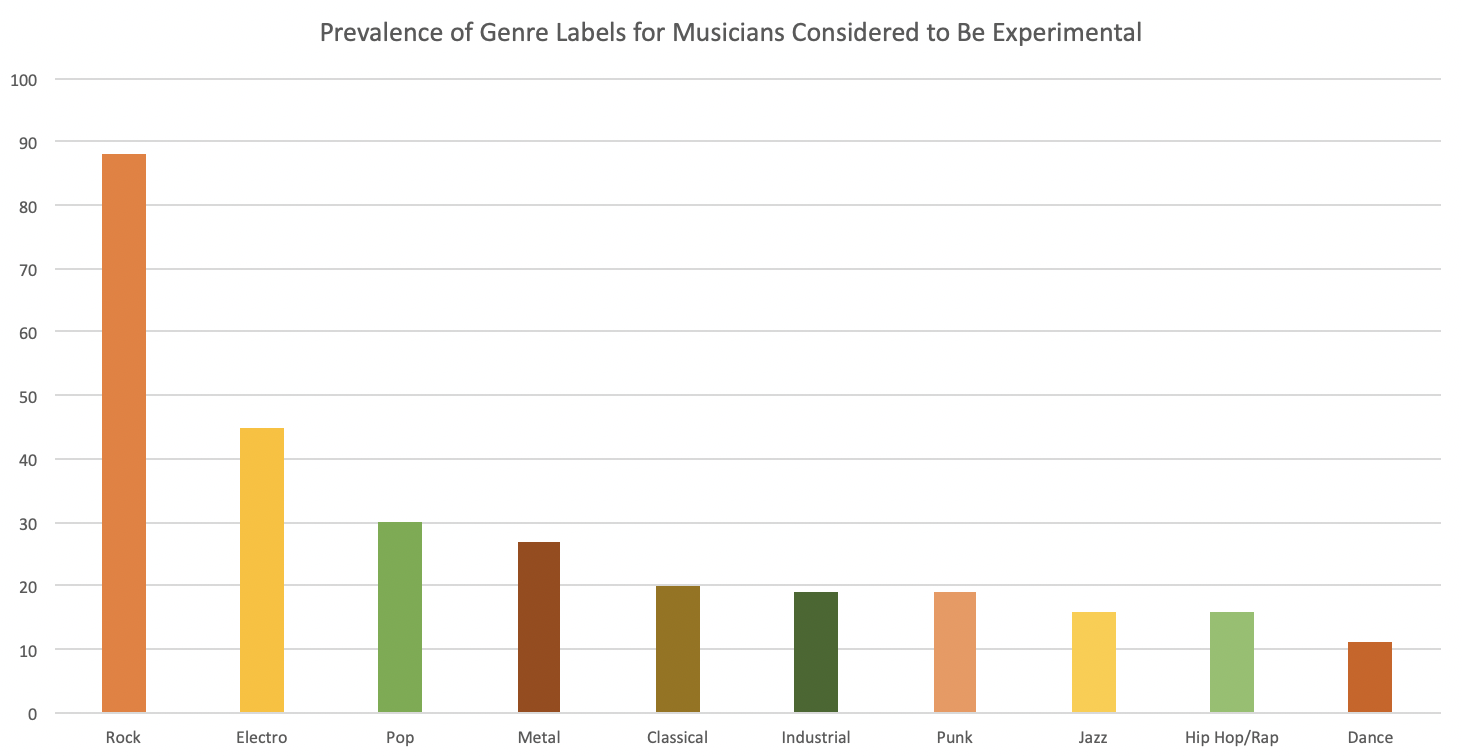 Of course, it bears mentioning that the sample size for this project is extremely small, and was drawn from a list that was generated manually, rather than automatically. Consequently, the list may be especially vulnerable to systemic biases of Wikipedia editors. Nevertheless, this brief study is a starting point for better understanding the application of an especially ambiguous term.